After hearing about this book from a friend, I decided to check it out. I loved some of Robert Kiyosaki's other books (I've read about 15 of his other books) so I figured I'd give this one a read. This book was pretty bad in my opinion. The first half of the book talked quite a lot about Rich Dad Poor Dad and it also went into the Cash Flow Quadrant. I love both of those books, but the summary this book provided about those two was sub-par. I would highly suggest everyone to just read those two books rather than rely on the summary this book provided of them.

The second part is where the meat of the book comes in. This is where Robert really sells the concept of Network Marketing. The first sentence in this section is that Robert has never actually been a part of network marketing. This is sort of a hypocritical statement coming from Robert's other books. He teaches that in order to learn to be rich you need to learn from people who have actually become rich. Therefore, to write a book about Network Marketing in which he has never been a part of is against the whole concept of his Rich Dad Poor Dad brand.

Building a Network of People

In my mind, networking is all about the reason. What is the reason you are meeting with someone? What's the reason you are building a relationship with them? Sometimes it's because you need friendship. Sometimes you build a relationship with someone around your profession. You can obviously cross-talk between your network, but ultimately certain interests revolve around certain people in your network. If you want to build an event décor business (my Tokyo Lights example), than it's a lot easier to network with people in the event décor industry or people that are interested in that. I have met event planners and event coordinators from the world's most profitable event agencies. My network is far reaching within a certain industry and it doesn't make much sense to pitch those people about something in a completely different industry, because that's not what that network is interested in.

It's not About Income: It's About Assets that Generate Income

This is another concept that I love from Robert's Rich Dad series. It all matters where the income is generated. He talks about how your house is not an income because it does not put money in your pocket every month. This concept really resonated with me the first time I read it, but the eight “assets" he lists in this book most of them I don't think fit his original definition of an asset.

Asset 1 is a real-world business education. This one I can agree with. Your mind is your biggest asset ONLY if you use it to create wealth. In reality, it's not quite an asset until you use it, so maybe it's more of a tool. Being able to learn about business and learn about how to conduct yourself within the business only comes from educating yourself. Network Marketing can be a very good way to build this real-world business education especially if you are someone that feels uncomfortable starting your own business.

Asset 2 is a profitable path of personal development. I feel like this one is stretching the concept a bit. This “asset" could fit right alongside the first one in developing your mind and ultimately developing yourself, but again it's only an asset if you get out and start a business. I would picture this one not as an asset but more of a tool again.

Asset 3 is a circle of friends who share your dreams and values. The thought here makes sense, but I'm not sure how it applies to Network Marketing. When your surround yourself with rich minded people those people are going to have businesses that differ from yours but are complementary. For example if I knew someone in my network that had an event hall or someone in my network that hosted large conventions then it could turn into an asset because I have a way to generate income through that person. If everyone I surround myself with is doing the exact same thing than how does that help me personally generate income. It's an idea that makes sense in the right setting, but not this one.

Asset 4 is the power of your own network. This concept I related to because of online digital marketing. The power of a list is amazing. If you have a group of people that are fans of something that you do, that “list", or fan base, is a major asset that you can tap into. For example, before you write a book if you create a list of people that are excited about your book or the information in it, you can send a message to them all and convert a percentage of that list into income. Within the concept of Network Marketing you can create a group of people “under you" that generates your income so in that way I could see how this applies and could be an asset, but this list needs to be very big in order to convert a significant percentage into actual income.

Asset 5 is a duplicable, fully scalable business. This is one in which I don't agree. A business should not be duplicable. The tasks to accomplish the business should be easy for an employee to plug into, but if the business is duplicable than someone could easily copy your business model and out-execute you. Robert talks about building a B business, but in network marketing you aren't building a scalable business, you are building your list. There are no employees, no systems or processes that you can simplify because you are simply building a list of people. So the statement might be technically correct, but I don't believe it applies in the way a B business should operate which is the basis of Roberts education.

Asset 6 is incomparable leadership skills. This goes right back to number one and number two. I don't see this as any different. Your mind is an asset ONLY when applied. Learning about leadership skills and then applying them the correct way to your business is a great tool.

Asset 7 is a mechanism for genuine wealth creation. The great thing about this section of the book is that Robert brings everything right back to real estate. He is a firm believer in real estate and it shows in this section. If you have the money than put it into real estate. Become an investor right now, because ultimately you want your money to work for you, so whether you build a list with network marketing or start a small business the point here is to put your money to work for you.

Asset 8 is big dreams and the capacity to live them. I'm not sure how this is an asset. It doesn't generate income to have big dreams. It might improve your mental health to have big dreams, but ultimately this goes back to what we discussed in Asset 1.

Is Network Marketing the Business of the 21st Century?

I feel like you can gauge whether or not this industry is really the business of the 21st century by diving into how much the average person can make by becoming a distributor and also how the industry is doing as a whole, so I tried to do a bit of research.

According to the Journal of Historical Research in Marketing, Vol 6, Issue 4, 2014 published by Emerald Publishing, the average annual earning for Amway distributors in Wisconsin in 1980 earned $744 (2012 dollars). The average annual earning for Herbalife in 2012 was $749 and Nu Skin, $641. So on average, network marketing distributors are making an extra $750 per year, not even close enough to cover a mortgage payment.

Forbes reported that Nu Skins revenue in 2013 was up 10% from the year before and 30% of it was from mainland China. Without mainland China's growth Nu Skin's revenue growth would have been negative on a year-over-year basis. This tells me that Network Marketing is a good business model in developing countries (perhaps because it's something new and fresh), but in countries that have been developed for quite some time it's not a good business even to be at the top of the network.

This book has some good points in it, but it seemed like Robert was too eager to just get the book out there that he didn't take the time to think about how the concepts applied to Network Marketing. These concepts could easily transfer over to any other business venture as long as you have the knowledge to make it happen. Is this a good book for beginners, absolutely. If you have never been introduced to the concepts in this book than it will start to open up your mind to bigger possibilities, but just don't get caught up believing that you can only do this through a network marketing company.

The cons are that there is too much of the same thing being hashed out over and over. Three or four of the assets listed are pretty much the same thing and the others are not really applicable to network marketing. Again, this felt like Robert rushed it out. It felt like he pushed the sale of this book to his followers to make a quick buck. 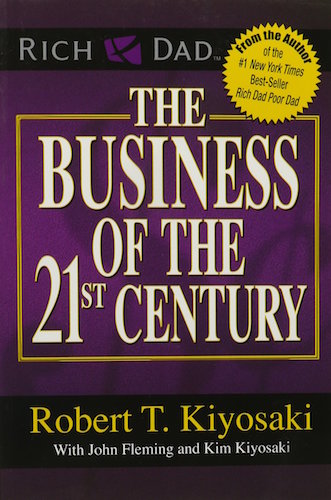 Business of the 21st Century by Robert Kiyosaki

I would give this book a one out of ten. There are much better books that you should read before reading this one. Rich Dad Poor Dad and Cash Flow Quadrant are a good start. I would also suggest The Millionaire Fastlane by MJ Demarco to understand what actually constitutes a good business to start. The NECST principles found in that book can really shed light on why starting a network marketing business might not be the best long term solution.