Yesterday I visited Haku Ramen House in American Fork, Utah. My wife and I came down from Northern Utah because we were planning on going to Evermore in that same city. We decided to stop in for some ramen and it was a toss up between Haku Ramen and Tamashi Ramen and Sushi. We chose Haku because it was strictly a Ramen place rather then a Sushi place. Haku is located at 101 NW State St #104 in American Fork. Like other Asian restaurants it's open for lunch (11am-3pm) then closes before opening up for dinner (5pm-9:30pm) again. On Friday, Saturday, and Sunday it's open around lunch time and doesn't close until late.

We wanted to eat dinner before heading into Evermore that evening, so we showed up around 6pm and the first thing I noticed was how tiny it was. I mean this place is teeny tiny. It sort of took me by surprise how tiny this place was. The wife of the owner took us to our table immediately as we walked in and gave us menus. Looking around there were quite a few people already there eating which was a really good sign.

The walls were pretty bare as this looked like your typical Cafe Rio style restaurant that had been converted to a ramen shop. The only major attention grabber was the large screen TV playing NHK news broadcast. NHK is a great channel to have for a ramen shop because it always makes you nostalgic for Japan just watching and listening to the reporters talk about what a great place it is. The other major entertainment device was a tiny bluetooth stereo that was set on a shelf playing older American music.

Overall, I would give the atmosphere a seven. There wasn't much to look at besides the TV, but it felt really cramped for me.

The moment we walked in, I could tell immediately that the lady bringing us to our seats was an owner. She treated everyone with respect and made sure to keep everyone in the store happy. I'm not exactly sure what the characteristics are of ownership, but there is just a vibe that owners give off when they are working in their own restaurant that screams "I want to make sure you are 100% happy." That's exactly the vibe that I got. After we were sat down, I saw a man walk into the front door and go into the backroom. Immediately I figured he must be the other owner. He came back out to help, who I presume was his wife, and they both tag-teamed the floor together making sure that everyone was satisfied with their meals.

There definitely isn't Customer Service like an Owner's customer service. That being said someone who is trained as a server can occasionally out serve an owner and I think this would've been the case. Although the owners were definitely not impolite, they were not like the server I had experienced hours earlier when eating with friends at Buffalo Wild Wings. Sometimes service is not just about preventing the negative, but also adding to the positive which didn't really occur at Haku.

Overall, I would give the customer service a seven. Again the owners were great at serving, but either they should take some training on how to be better servers or they should bring in some server experts to help. 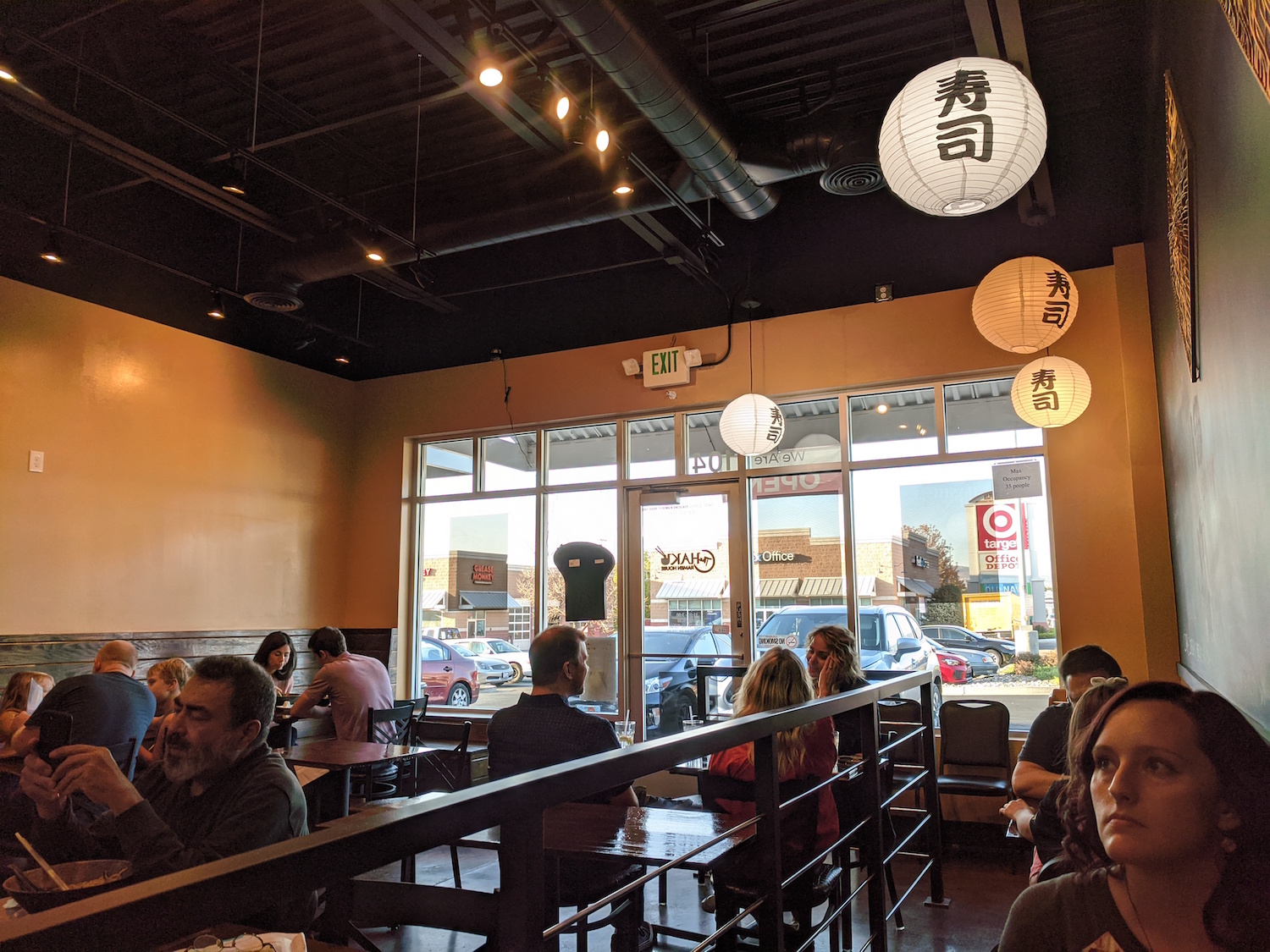 Of course when I eat Ramen I have to get the signature dish of the ramen shop I'm eating at so I ordered the Haku Ramen which was a special take on the Tonkotsu Ramen. The first thing I noticed when it came out was the presentation. The bowls they were using were very cool. It made the plastic bowl look as if it was made of grey speckled stone. They also gave us two ramen spoons which was sort of weird, but nothing crazy.

I took a look at the noodles we got and they were straight up white. I'm sure that is how it's meant to be, but I was a little taken aback. Our noodles looked almost like think Udon Noodles. If you're unfamiliar with Udon Noodles, they are usually thick white noodles, but in this case the thickness was similar to that of ramen noodles, but it seemed like maybe they were made out of the same dough Udon Noodles would be made of. That wasn't necessarily an issue, but it did seem like my noodles were a bit overcooked, as they were falling apart before I could chew them.

One thing I realized after I had finished eating and was looking around at the guests was that the Miso Ramen actually uses different Noodles. The noodles that I saw coming out of the Miso Ramen was more familiar to me as it was the yellow noodles with a crimpy texture. After seeing that, I kind of regretted ordering the same dish as my wife. We should've ordered both the Haku and the Miso Ramen and tried them separately.

Overall, I would give the noodles a six. The whiteness of the noodles indicated that whoever made these noodles did not use Kansui, an essential alkaline ingredient that sets ramen noodles apart. My noodles were also cooked a bit too long and could've been cooked 30 seconds less. That being said, I would love to go back and try the Miso Ramen Noodles as they looked exactly like I would've expected from good ramen noodles.

Haku Ramen's toppings were very Japanese. Right on top is the menma (bamboo shoots). The problem with Menma is that depending on where it's purchased, you can either get really good menma or really crappy menma. Unfortunately this menma was likely purchased from Mutual Trading and their menma is crappy. Momoya's Menma is the absolute best Japanese menma you can get, but understandably it's more expensive so it makes sense why they went with the crappy kind.

The other topping they included was the black fungus. This is a very Japanese ingredient to include in ramen. I'm not a super fan of them, but they are very traditional and some people like them. For me I'm indifferent about them.

Two factors when talking about chashu meat. The flavor and the texture. Haku's chashu texture was incredible! That pork was literally falling apart in the bowl even before I picked up the piece of meat. It was so tender that it was almost weird how much it was falling apart, but that is the ultimate goal of chashu texture! The flavor on the other hand was a little lacking. Chashu is your opportunity to fuze the strong flavors of the broth and the meat together. This chashu didn't have much flavor at all, but wow was it tender.

Overall, I would give the toppings an seven. The best part of the toppings was the cool factor of how the green onions were cut and the super tender chashu meat. Oh that meat was so tender I can't even get over it. The menma could've been better and the egg meat needed to be flavored a bit more.

The first thing I tried when my ramen came out was the broth. This broth is great! It was a lot more creamy then other places I've eaten which is a great factor showing that they really took the time to get that collagen out of the pork bones. There was also a hint of the black garlic oil nestled within the spots of oil. So not as much as other places, but I love how the black garlic gives a contracting look to the milky color of the broth.

The one thing I regret is getting the Miso Ramen. I honestly think the Miso Ramen would've been just as good or better then the Haku Ramen. The broth would've been really interesting to try as well because they claim to use the same pork bone broth just with an added Miso concoction.

Overall, I would give the broth an eight. The subtle hint of black garlic was a great addition to the creamy texture of the soup. Just based on this bowl I would've loved to try the Miso.

Overall, I thought this place was great. They had a simple menu, the broth was delicious. The tenderness of the pork belly was amazing! If they added the Ajitsuke to the egg and more flavor to the chashu I think that would've added a lot better flavor profile to the bowl to give it a unique taste. 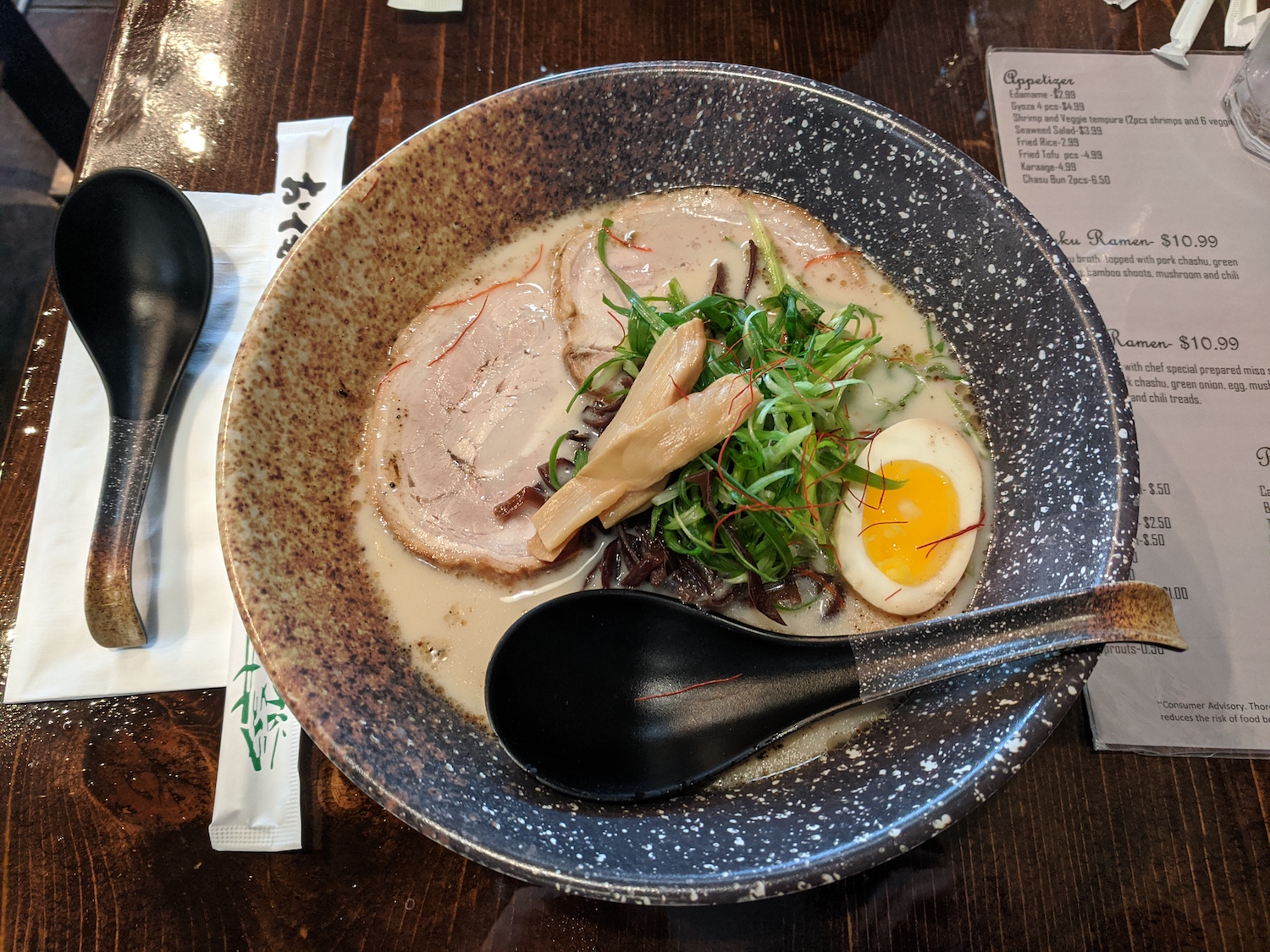