Before picking up this book, I heard about the Golden Circle in a TEDx talk by Simon. When I heard it, the concept immediately resonated with me. It made complete sense and I attempted to explain this concept to others by just pulling up the TEDx talk and making them sit through 15 minutes of Simon explaining it. In the book, Simon talks about how our limbic brain doesn’t process language and our neo-cortex brain has difficulty processing feeling. This seemed to be the case with me trying to explain the Golden Circle to others. I just couldn’t express the feeling of completeness that I felt when I heard it for the first time.

This is the most important concept in the entire book. Simon spends most of the time talking about this Golden Circle because it does a great job articulating the point he is trying to make. The Golden Circle is a target with two rings around the center. The "bullseye" is "Why." The first ring around that is "How" and the last ring is "What." Most often companies know what they do or how they do something, but they don’t know why they are doing it, besides to make money. This is a problem because why a company does something is the most important part. It’s the why that gives us that gut feeling and causes us to take action. What a company does or how a company does something will not motivate someone to action, it’s all in the why.

The most commonly cited example in this book is Apple Inc. We know that Apple makes beautiful computers. We know somewhat about how Apple does this. They likely have a group of engineers design the computer and send the designs to a manufacturing plant to have them made. There are probably a whole lot of processes and systems in place to make sure the "how" is correct. However, why does Apply do what they do? Simon believes Apple’s why is to challenge the status quo. When Apple does something, they are always doing something in order to break a mold or shake up an antiquated industry. So naturally, if you are the type of person that believes the status quo needs to be broken, then you gravitate towards Apple because they have embodied the feeling of breaking the status quo and you believe that needs to happen.

It’s been really difficult for me to articulate my "why" and I liked the Celery Test that Simon mentions in this book. Picture you are a just starting your company out and you receive insight from some colleagues about what you need to do to boost morale. One colleague says you need to give your people celery sticks. Another says, "we used Oreos and people went wild for them." Yet another says, we gave our people rice milk. And another says, we used M&Ms. So you go to the store and grab everything that everyone suggested because of course if it worked for all of them then they should all work for you. So you grab Oreos, Celery, Rice Milk, and M&Ms. If someone saw you standing in line they would have no idea what your "why" was. But let’s say that your company is a health foods company immediately you know that if you are giving your team Oreos and M&Ms then you are violating your why. If someone saw you standing in the checkout line with just celery and rice milk, they would immediately understand your "why." They would get that you are trying to be healthy. At that point, they would either say to themselves, "That person is trying to be healthy, just like me." Or they would say  "Look at that joker trying to be healthy. What in the world are they thinking." However, either way, your why is clearly being communicated.

When a company or individual does something that is totally against their "why", this erodes trust in everyone around them. The more times a person violates their "why" the more likely they will be seen as a fraud. Simon mentions that Walmart is currently in this situation. When Sam Walton started the company his "Why" was people. He believed that if you help the individual than the community will thrive. After Sam passed, his why was not passed on and Walmart has made decisions that don’t align with helping people and the community. This has caused major distrust in the corporation, to the point that communities are writing legislation to get them out of their communities.

The Circle is actually 3D

My mind was blown, whet Simon mentioned that the three circles are actually a cone. This makes complete sense. The Golden Circle is actually a megaphone that projects the "why" to the masses. This is why companies that can articulate their why have cult-like followings. The why needs to travel through the "how", travel through the "what" until it hits the mass market. If the message of "why" gets lost along the way, people don’t understand "why" you are doing what you’re doing and won’t care themselves. People don’t care what you do they care why you do it.

For me, the lessons learned in this book are many. The marketing aspect is very important to me, but it has also made me look deeper as to why I have the goals that I do. Why I am striving for certain things, and how to better articulate my why to the next generation.

The pros of this book are that Simon does a fabulous job explaining the concept of the Golden Circle. I almost thought of the 3D reveal as a plot point reveal in a mystery novel. I thought the book was well written and you can tell that Simon has been thinking about this concept for years.

One con is that Simon talks about the same companies over and over. It would be nice to hear some more "whys" from other companies. He talks about Apple, Harley-Davidson, Walmart and a few others, but that’s pretty much the extent. If these are the only companies that have been successful with their "why" then this concept is too difficult for the average person to utilize. I don’t believe that’s the case, but it would be nice to see more examples. 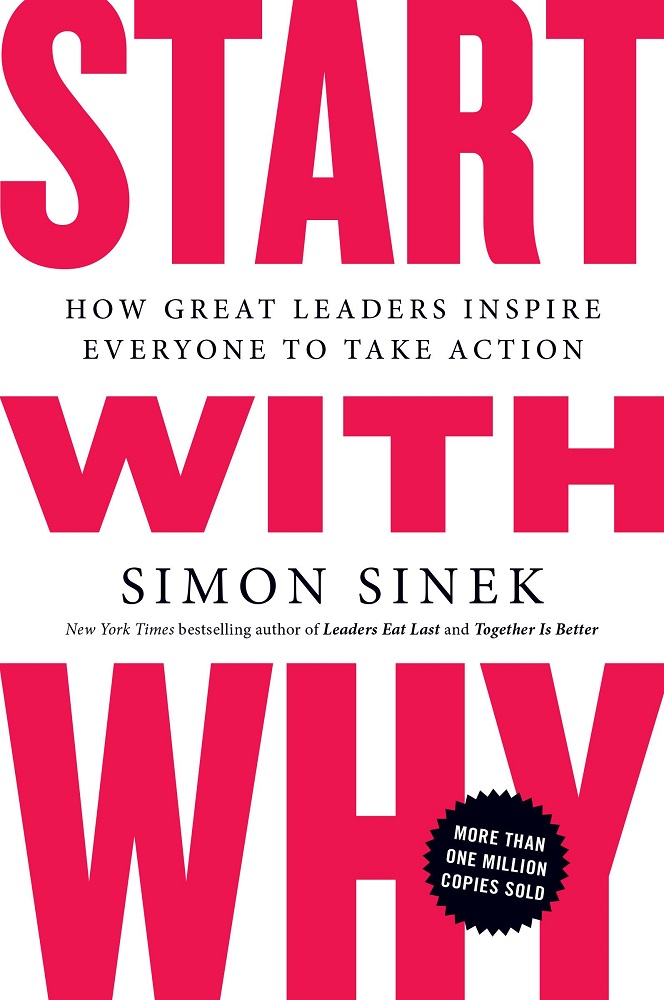 Start With Why by Simon Sinek

I would say that this book should be read and understood before you do anything with business. Naturally, you will know your own why, but maybe not be able to articulate it well. If you read this book before creating a venture backed by your why, I think that would be the best time to read it. The second best time to read it would be if you were struggling to convey your why to the market. This really helped me understand how to covey my why better. I had to think hard about what my why was and how to articulate it for others.

I’m not sure what other books are similar to this one. I feel like this book is pretty unique. It’s very theory based, but you can walk away with certain actions you can take in your own mind. This book gets a nine out of ten. It’s well worth the read and even more worth it if you are struggling understanding why you do what you do.