The only reason I even considered trying the ramen here was there was a huge banner on the outside of the building that said “Now Serving Ramen Noodle Soup.” I would not have even attempted to eat Ramen at a Sushi Burrito place, but because I saw the sign, I begrudgingly accepted the possibility they might have a decent bowl of ramen here. Sushi Burrito is open Monday thru Saturday from 11am to 9pm (10pm on Fri, Sat), and Sunday from 2pm to 8pm. It is off Hill Field Road in Layton Utah. 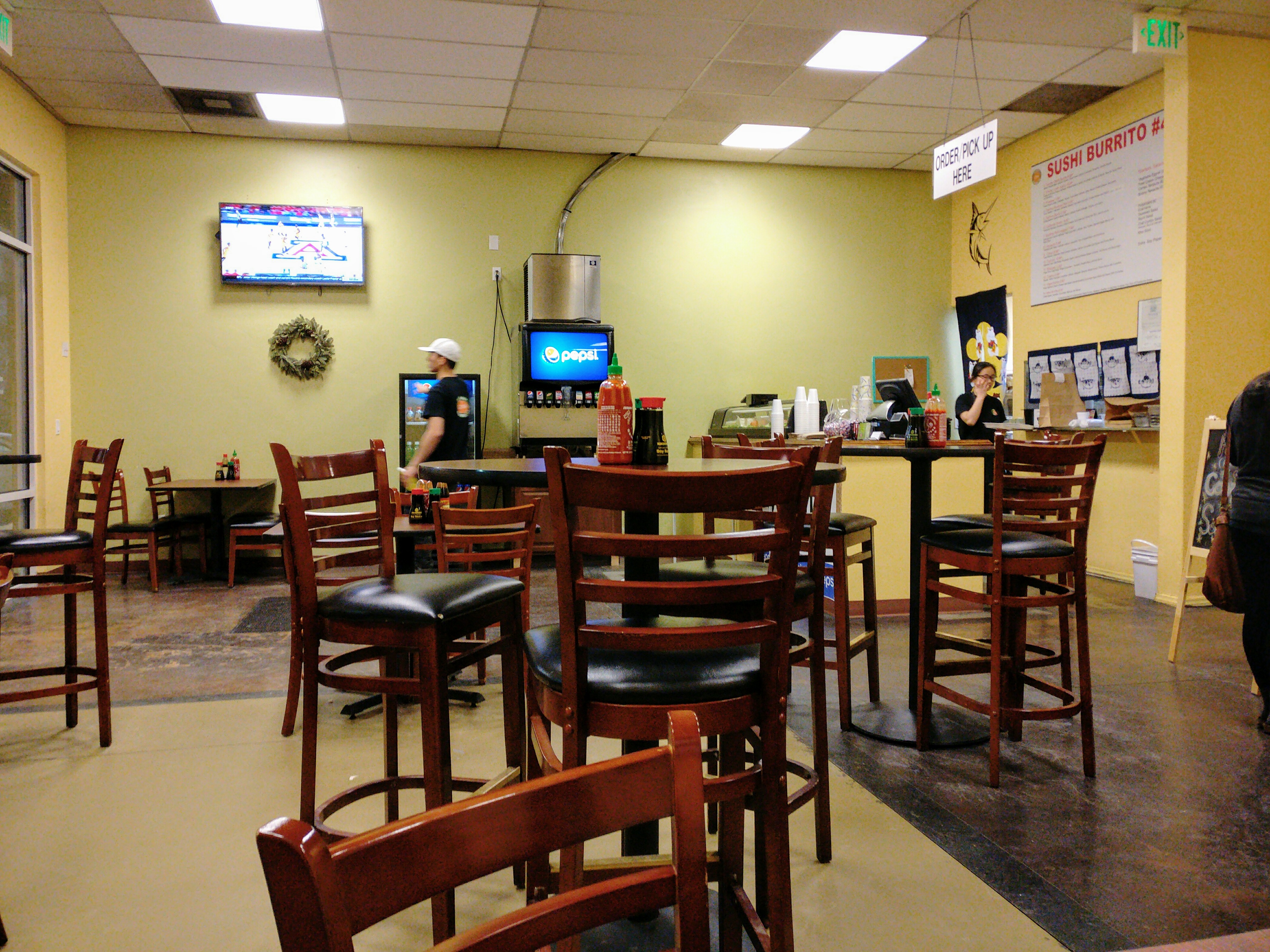 This place is weird. I’m not sure what’s going down at this establishment, but it seems like the place is owned by three different companies. Maybe the same owner owns it all, but if that was the case, the branding is very convoluted. When you walk in the left side is the Sushi Burrito place and the right side is a Hawaiian place, but on the outside of the building there is an extra sign for a Poki Isle place. So three signs on the outside plus the two counters inside just makes everything really confusing. It seemed like a festival or a carnival and you order from different counters to get what you wanted.

This place was less like a typical sit-down restaurant and more like a take-out place. You order your food, pay for it then, they call your name and you can eat it at their tables or leave. The place was fairly clean, but it still made me question whether things were actually clean or if they were just made to look that way.

Overall, I would give the atmosphere a four. If you are ok with the carnival feeling of purchasing food then you might like it, but for me it was just confusing and weird.

The only person you interact with here is the cashier. Fortunately, the cashier was nice and friendly. She took our order and called our name when it was ready. There wasn’t much other interaction from anyone else at this establishment.

Overall, I would give the customer service a seven. They didn’t need to do much, but because of the friendly vibe as we walked in it made the experience feel a bit better.

I’m just going to be upfront with this one. The noodles were the worst. The absolute worst. These noodles were instant cup ramen noodles and were terrible. If you want to pay an incredible price for something you can get at Walmart for $0.50, then eat here, otherwise stay far away!

Overall, the noodles were a one. At least there were noodles in here and they were cooked, but that’s about it. There was no taste, it was instant noodles, and it was nasty.

At this point, there isn’t much else to say. Already I would not recommend this ramen to anyone. For toppings, they had half of a boiled egg, two strips of narutomaki (fish paste), green onions, chashu (the meat), and fried onions. I will say that the fried onions was a unique choice to put in the ramen, but the egg was completely boiled through, not soft-boiled. It was not marinated. It had absolutely no taste. The meat was ok, but it wasn’t great. It was cut in strips and was too fatty. Now fat is usually a great thing to have a on a piece of meat, but in this case there was no flavor to exemplify, so the fat was chewy and useless.

Overall, the toppings were a three. The fried onions was an interesting choice, but the meat and egg were terribly done.

Overall, the broth gets a two. I was able to finish most of it, and it had a hint of tonkotsu, but more likely it was almost all, instant ramen packets dumped into a pot and used as the broth. This was not what a tonkotsu ramen was supposed to taste like.

I absolutely do not recommend the ramen here.

Restaurant establishments need to stick to their specialties. Same feedback goes here as well. Sushi Burrito has good sushi burritos and decent poke bowls, but their ramen is terrible! If you were thinking about trying the ramen here, just do yourself a favor and go to Walmart. Spend $0.50 on a packet of instant ramen and boil yourself an egg. You will save yourself a lot of money and a terrible ramen experience. 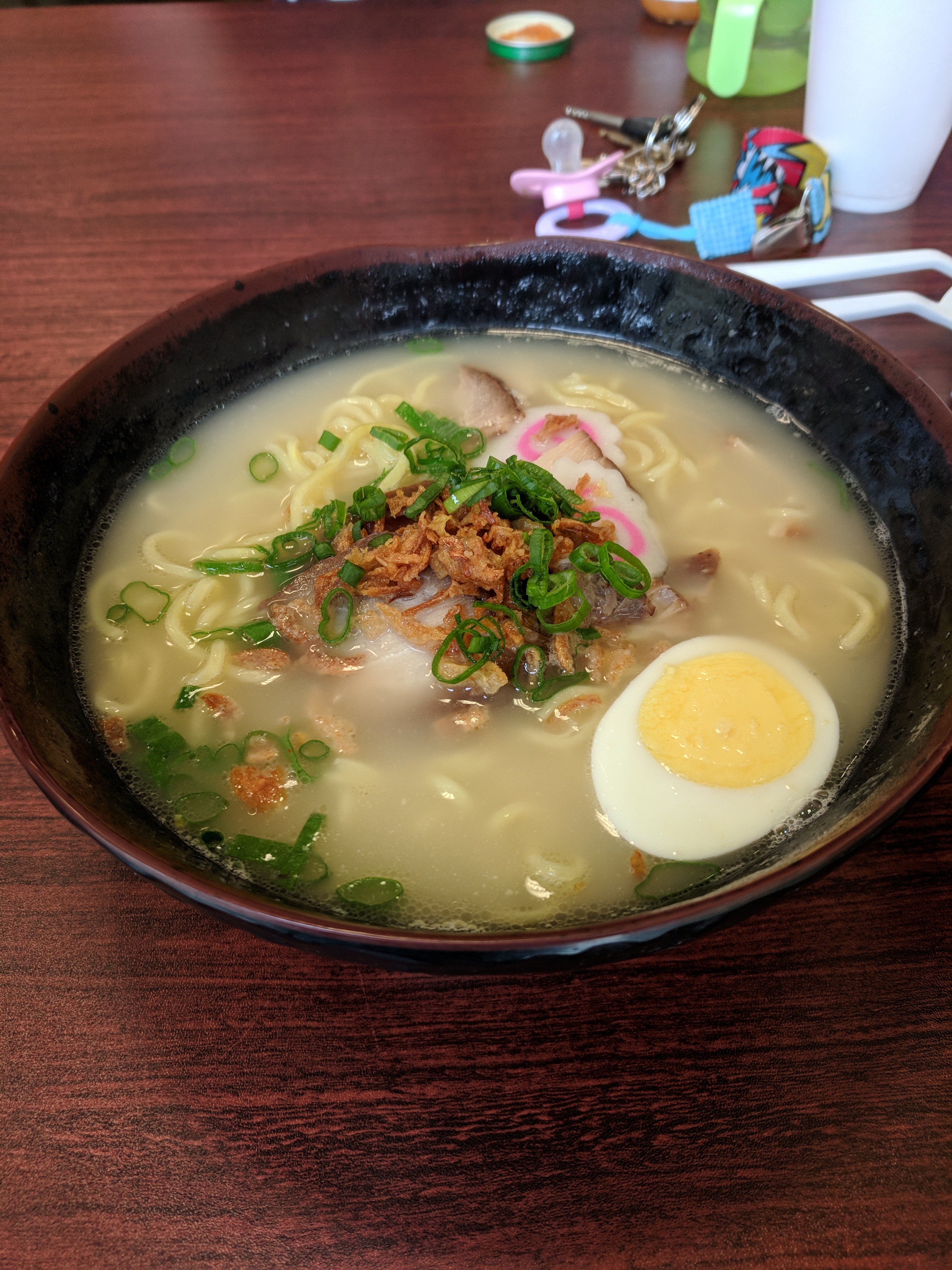