The 10X Rule is the second book of Grant Cardone's that I have read. The first was "Sell or Be Sold" and both books contain a common theme. Either be the best in your industry or get out. I'm not sure I completely agree with the undertones of his writing style, but just because you don't agree doesn't mean you can't glean important nuggets of information.

The first mistake that the majority of people make is setting their goals too low. The reason this becomes a major mistake is because if their goal is too low, people start to feel like they're working rather than chasing a passion. Any goal that will feel good to accomplish will be difficult to achieve so you might as well set higher goals so the reward and payoff will be great enough to make you feel like you are chasing a dream rather than just grinding yourself down.

The second mistake is that people greatly underestimate how much action is required to accomplish their goals. With any goal that you set, you need to account for all of the obstacles that will come your way. Most people don't realize the amount of action required to accomplish that goal and they give up because it ends up requiring more effort than they originally thought. This includes all of the adversity you will face as you continue to become more and more successful.

The third mistake is that people spend too much time competing and not enough time dominating. Competing is when you look around you to see what other people are doing and try to catch up. Dominating is when other people look at you a mile down the road and realize they have no chance of catching up. Dominators set the pace that others look up to and only wish they could follow. They never play by the agreed upon norms of their industry, but rather they create completely new ways to dominate their sector.

I found these two insightful terms as I read. Grant talks about how the likely reason your business is not as successful as you would like it to be is Obscurity. He talks about how every day there are thousands of businesses created, hundreds of thousands of books created, and thousands of movies and shows. In addition, the internet steals the majority of people's attention with millions of new posts every single day. Even if you think people know your business, you are wrong. Most people never even get close to being "over-exposed." Obscurity is your problem! Not enough people know who you are or what you do. Even if they knew you at one point, the amount of information that crosses their mind is so much that they likely will forget about you after a few weeks. So combatting obscurity is the only way to break through the crowd, dominate your market, and find massive success.

Obsession is a Gift

Grant talks a lot about the word success and how it's a moral obligation for you to succeed. Whatever success means to you, you should feel a sense of duty and responsibility to succeed. It's not an option to succeed it's your duty. When other people diminish the importance of success by saying things like "success isn't everything" they are giving you an excuse to limit your vision of success for yourself. Grant ties this in with having the right mindset. If you believe that creating success is in your hands and your hands only than you become the type of person that never uses victim thinking. You start to realize that even when seemingly, external bad luck hits, there is always something you could have done to prevent it.

This ties right into to being obsessed. In order to achieve your 10X goals, you need to be obsessed with success and obsessed with the process. Success is more like a garden than just a destination. You must keep going back to tend it and care for it. The ability to be obsessed with something is a major gift because nobody has ever accomplished something in this world without being obsessed. In order to succeed at 10X levels you need to live, breath, and die whatever it is you are doing. Success

This last idea is one that I have heard before and I wanted to sneak it in here because I think it's a great reminder. In order to have a gauge on success, ask yourself if you are seeing different problems in your life. If you are starting to see bigger problems emerge in your life that means you are going in the right direction. Everyone will have problems. It's part of life to have problems. The important question is "What kind of problems do you want to deal with?" Do you want the problem of having too many customers and not enough seats to fit everyone? Or do you want the same old problem of not having enough people to fill the seats? It goes with every situation in life. If you can see better problems coming down the pipeline, it means you are going in the right direction.

The pros of this book are that it's a very mindset driven book, but Grant does a great job illustrating how I can use the theories in my everyday life. He talks about success, which is a very abstract concept, but than shows examples of when to use that mindset and how it helped him.

The cons of this book are that as I was listening through this book I felt unmotivated to do anything because according to Grant's mindset, if I can't be the best in my industry than why even bother trying? I don't agree with this mindset in terms of business because there are a lot of people in different phases of their entrepreneurial journey. Keep in mind that eventually, it would be in your best interest to have this "domination" mindset, but don't get discouraged that you're not even close yet, don't give up. 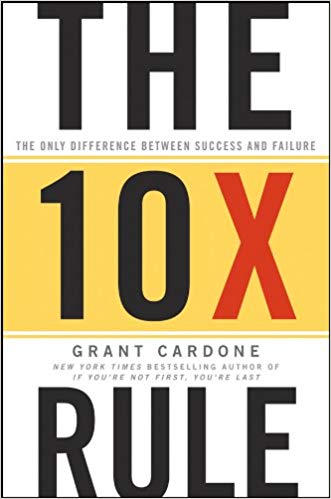 The 10X Rule by Grant Cardone

I would say you should read this book once you have a business that you've been actively working at for sometime. It would be the perfect book to read when you start getting into a slump after seeing some initial success. If you haven't started a business at all than it doesn't make sense to read this book because it's mainly about business success. There are a few nuggets of familial success, but not much.

The other book similar to this would be Sell or Be Sold by Grant Cardone or any of his other books. I'm sure that most of his books resonate the same mindset and vibe. This book gets an eight out of ten. It's worth reading. There are plenty of nuggets to take from this and implement into your daily life. Achieving 10X goals takes 10X action and the hardest part is the action.