I love Pixar. I love Pixar so much that anytime a story or book pops up that has anything Pixar related I will read it. Pixar is what drew me to this book. I knew that Bob Iger was the CEO of Disney and I also knew that in Bob's time as CEO he purchased Pixar so I was excited to hear about that acquisition and understand how everything went down from his perspective.

This book was formatted a little differently than my other reviews on books. Bob treats this book partially like an autobiography and partially like a business book. There are of course lessons to be learned from reading it, but the entertaining portion of the book is Bob's actual story. How he came to be the CEO of Disney and how he transformed Disney in the time he was there. Of course I wouldn't expect anything less than a fabulous story coming from the CEO of Disney.

So here are three subjects I got out of this book out of the many topics he covered.

In the middle of reading this book I was going through a business acquisition of my own and the main thought in my mind was how do I integrate this new business without destroying what they have built? Bob talks about the acquisition of Pixar and he mentions that he saw their process and he saw their culture and he just knew that if Disney really did purchase them it would need to be done in a way that kept the culture of Pixar separate from the culture of Disney.

Again when Disney purchased Marvel and then later Lucas Films, Bob recognized the need to keep their cultures in tact. I mean it makes sense right? You are purchasing the company for it's people and for it's unique culture why do so many businesses purchase a company and then immediately destroy the very thing that made them unique. I feel like Twitter did this to Vine when they purchased them.

If you make a business acquisition and immediately think that you need to integrate it with your own culture or if you need to replace the culture of that business then maybe you need to rethink what it is that you are actually purchasing.

Both of these quotes really resonated with me because I want to create possibilities for greatness, therefore I need to take bigger risks. Again, I was reading this book right in the middle of my first business acquisition and these words helped me to go through with it. I needed to understand that with that acquisition I needed it to be an opportunity to create greatness and not just an ego booster or something to be checked off my to-do list.

One thing that Bob does a great job doing here is that he knows how to stay humble. Another one of the quotes from his book was that "Anything that reminds you that you are not the center of the universe is a good thing" also "Don't let your ego get in the way of making the best possible decision." This lines up directly with the ego boost you might get from making a business acquisition like he explains 3-4 times in the book. Every decision needs to be the best decision for those around you not just yourself. So taking risks and being creative needs to come from you, but remember that your ideas are not the center of the universe and the decisions you make need to make sense for everyone and not just for your ego.

The last idea that I really liked from this book was the idea of embracing change. Bob didn't mention Netflix specifically, but I knew from living through this time that Netflix was the big winner when it came to entertainment. Netflix was the new kid on the block that just destroyed the others with their streaming service. With Disney+ coming up around the corner I could tell that when Bob talked about Embracing Change, this was one of the main examples of that.

As a business it's important to never become stagnant. You must keep innovating and you should never be afraid of failing due to attempts at innovation. You need to be comfortable with failure and give yourself and those around you permission to fail at the expense of innovation. Disney's jump into the streaming world has been slow and disappointing, but that's the price you need to pay sometimes to really innovate.

The pros of this book are that it's a really good story. If you love Disney, Pixar, Marvel, or Star Wars (which is probably the majority of the world population, honestly) then I think you'll find some entertainment from reading this book. In terms of a business book, it's ok. The lessons are really hard to pick out because they aren't laid out in front of you as you read the book.

The cons of this book are that I think Bob should've waited to write this book until after he was officially out of the CEO role, because immediately after it was released he is having to deal with the Coronavirus problem that is plaguing Disney. It would've been really nice to see his perspective on this issue being the head of Disney. 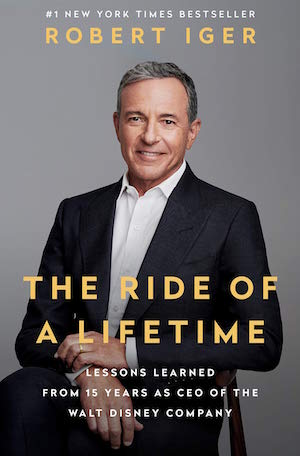 The Ride of a Lifetime by Bob Iger

Overall this was an entertaining book. I took nuggets of gold out of it, but it wasn't laid out like a business book so getting business concepts was a bit harder. The three ideas I discussed above were mainly my personal insights and I know that if anyone else were to pull insights out of this book it would be vastly different than mine. I would give this book a nine for the entertainment factor, but probably like a six for the business factor.