Simon has a really good knack of making difficult concepts really easy to understand. This is not an exception with this book. He discusses the question about why there are leaders, what makes them a leader as well as why there are followers and what makes them followers. I really love how the concepts he states are very "matter-of-fact" scientific answers to questions that you wouldn't think have a straightforward answer.

The first main point I got out of the book was that leaders are people that create circles of safety around them. The concept of the circle of safety can be related to Maslow's Hierarchy of Needs. Us as humans will do everything in our power to keep ourselves and our loved ones safe. Back in the day, it meant that we were focused on surviving the wild, not being eaten by other animals and making sure we had enough food to survive to the next day. Nowadays it means making sure we have enough money to purchase groceries and rent.

It's in our Biology

There are 5 chemicals that mother nature has given us to help us survive as long as we have. The 4 happiness chemicals are Endorphins, Dopamine, Serotonin, and Oxytocin. The bad chemical is Cortisol. Cortisol is the "fight or flight" chemical that is released in our brains when danger is nearby. It gives us feelings of stress and anxiety. We as humans aren't supposed to have this chemical in our brains for extended periods of time because is stunts growth and kills our immune system. So when we stay in a work environment that gives us that feeling it is literally killing us.

Endorphins and Dopamine are the instant gratification chemicals. Endorphins job is to mask pain. Endorphins keep us going during work-outs (runners high) or keeps us working on a project through the night. It's what keeps us going when things are painful.

Dopamine's job is to give us a sense of accomplishment. It gets released into our brains when we achieve a goal. This is what helps us humans get things done. That's why it's so important to write down your goals, because your brain will believe it is moving toward that goal and you'll get a hit of dopamine.

Serotonin and Oxytocin are the long-term gratification chemicals. Serotonin is the loyalty or allegiance chemical. Simon calls it the Leadership Chemical. It's gives you the feeling of significance, pride or status. Anytime someone says they want to do it for their mom or they want to accomplish this for their boss, Serotonin is behind it. It's what creates bonds with the group or allegiance with an organization.

Oxytocin is the chemical that creates intimacy and trust. It's the feeling you get that you know someone is there to protect you. Moms feel this for their kids. Lovers feel this for each other. Hugs and shaking hands also contributes to this chemical being released in your brain. When you have a team dinner or one-on-one with your boss it can also create an environment of intimacy and safety.

The problem with society right now is that almost everyone is focused on the short-term chemicals of Endorphins and Dopamine and they aren't focused on Serotonin and Oxytocin. Our cell phones play a huge part in this. Certain activities create a Dopamine burst like gambling, nicotine, alcohol and cell phone usage. When we become dependent on those things we create an addition to Dopamine that's hard to break. Using our phones to distract us from our daily lives is another way Endorphins are being released into our brains without any real function. These are addictions that will only hurt us in the long run.

The amazing thing about Oxytocin is that it has the ability to actually inhibit addictions. When Oxytocin is present the harder it is to get addicted to the Dopamine bursts. Oxytocin boosts our immune systems and increases our ability to solve problems. When you perform a small act of kindness towards someone else it sends oxytocin to your brain and theirs. When someone even sees you do that same thing it sends oxytocin to their brain as well. So as a leader it's important to try to increase the levels of oxytocin and serotonin in your organization rather than focus on the instant gratification chemicals.

The pros of this book were that Simon has an amazing ability to take a really complex topic and break it down scientifically and simply. I would have never expected leadership could be broken down into the chemicals our brains release. I learned a ton and I frequently find myself referencing the chemicals he mentioned in this book.

The cons are that if you really wanted to learn about this topic you could look up Simon's 45-min TED talk all about it and skip getting this book altogether. Although he does go much more in depth in the book, the basics can be gleaned from that TED talk and you wouldn't have to read this book at all. 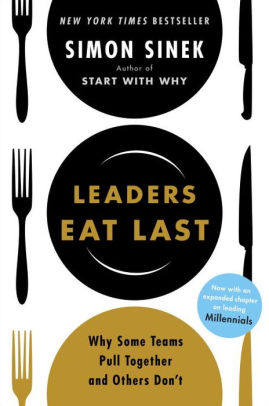 I would say that pretty much anyone could read this book. If you are a business owner or if you are an employee of a giant corporation it's good to understand your own biology and understand why you might be feeling the way you do. Anyone can be and should be a leader so it makes sense that if you want to create a good environment around yourself you could use the concepts in this book to do just that.

Other books like this one is Simon's other book Start With Why. I would say that this book gets a nine out of ten. Simon is just entertaining all around and has a way of speaking that really makes complex topics very easy to understand.